The entire program is open to all participants.

For each course, we recommend that you realistically assess your ability for
your own sake and out of respect for the other participants.
We would be happy to help you and reserve the right to decide on course placement. 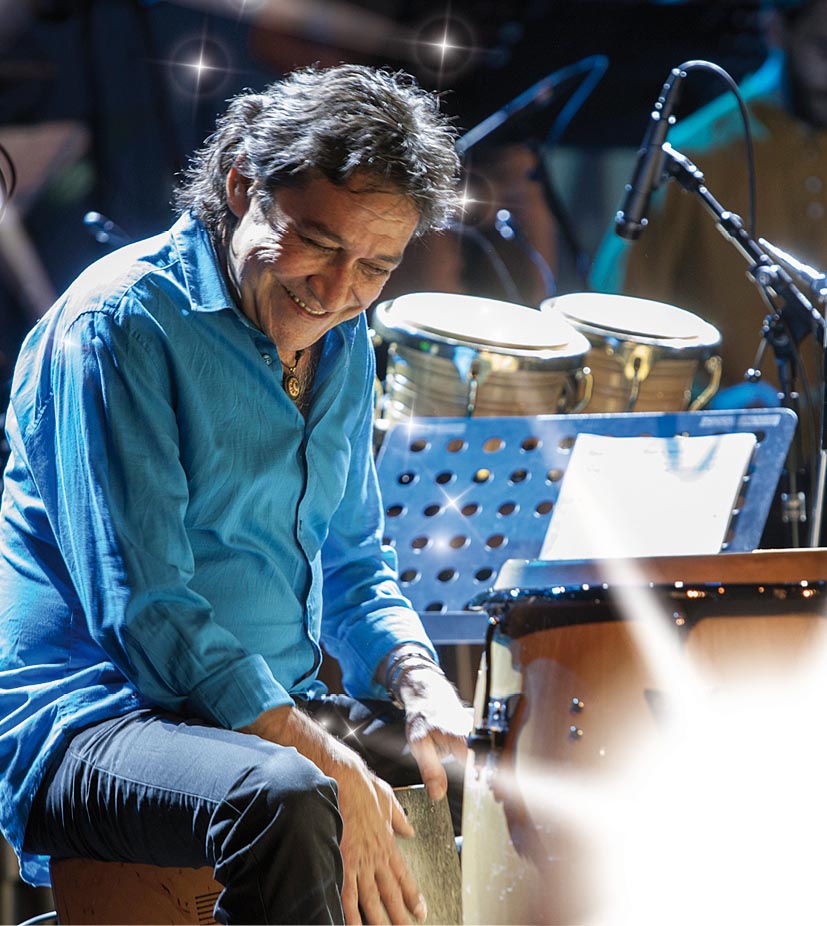 Born in Venezuela. Ismael Barrios’ band SALSA EXPLOSION fills concert halls all over the country. It is the music that Ismael has been playing his whole life. He can be heard on more than 90 CD and DVD productions. Collaborations with Martin Grubinger’s PERCUSSIVE PLANET, Benjamin Schmid, Trilok Gurtu, Alegre Correa, STS, OPUS, Marianne Mendt, and many others.
He teaches at the STUDIO PERCUSSION school and at the University of Music and Performing Arts in Graz.

Conga, bongo, claves, cowbell, guiro: Each of these instruments has a special and important function in salsa music. Together they form the ingenious rhythmic network and basis for music from Cuba. What should you expect? Pure Latin percussion from a grand master of this genre. 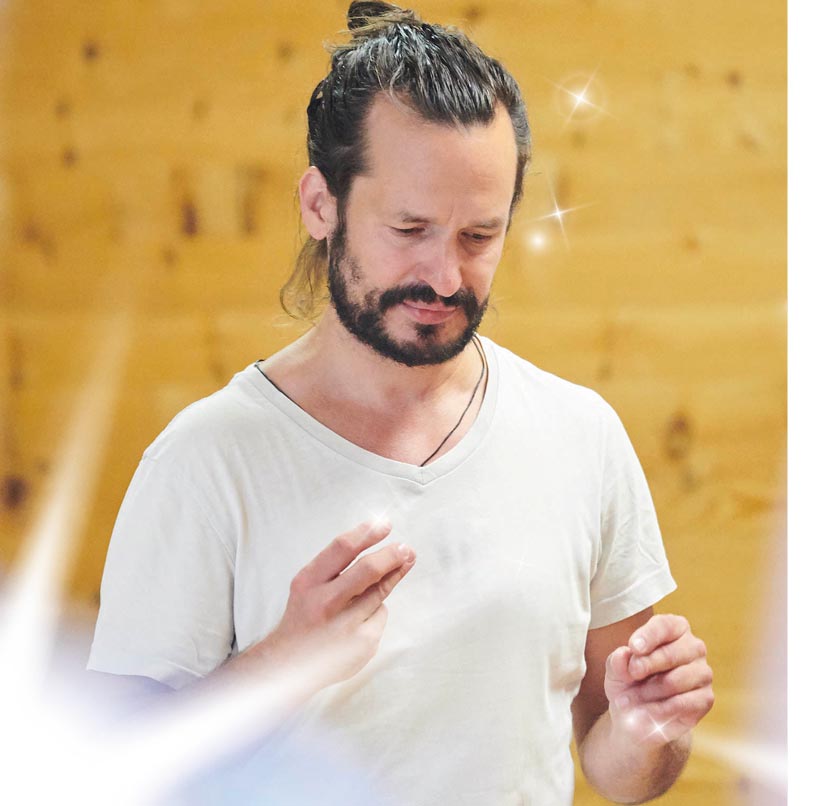 THE WAY TO STOMP

It’s world famous: the basketball scene from STOMP.
Now it’s our turn. During the course, we will delve into the world of ubiquitous rhythm and create music, grooves and choreography with everyday objects—and naturally first and foremost with our own bodies! 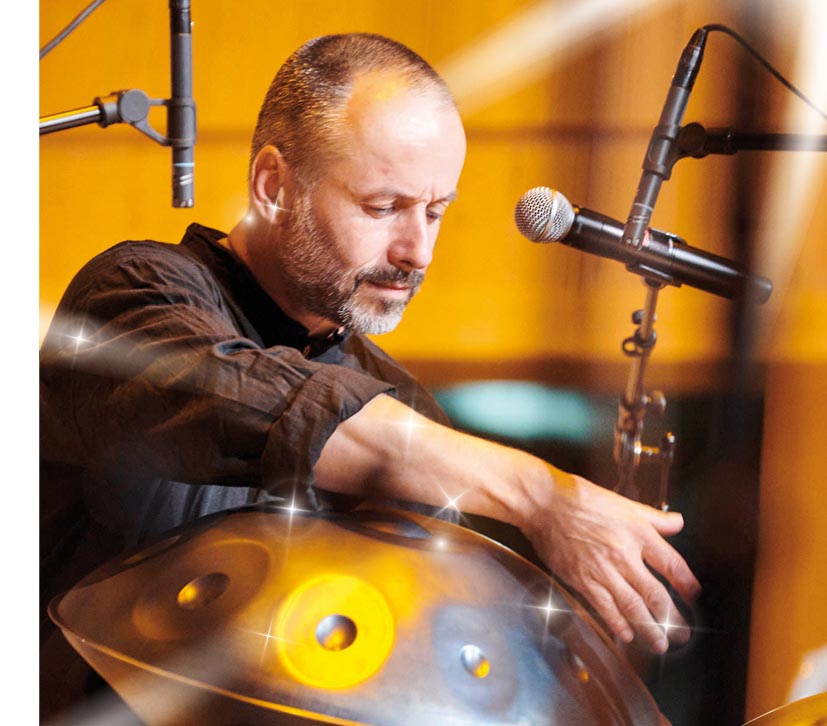 Peter Gabis teaches jazz drumming, rhythm and percussion at JAM MUSIC LAB Private University in Vienna. He is a handpan player from the very start, drummer, percussionist and sound massage therapist. He studied jazz drumming and instrumental education at the private Vienna Konservatorium university and at the Manhattan School of Music in New York. Since 2003 he has worked intensively with ethnic music and percussion in Africa, India, Mongolia and the East. Numerous music education trips to Mali, Mongolia, Morocco, Turkey and India.

The sensitivity of the handpan requires an extremely subtle approach, which opens up many new modes of expression.
To play the handpan, a listening, sensitive, playful and inquiring attitude is required. The mind of the player normally becomes peaceful as he or she actively and joyfully makes music.  This makes it relatively easy and stress-free for the amateur to experience the basic principles of music. This workshop will go back and forth between two worlds, the technical and reproductive approach and the perceptive and intuitive approach.

He studied jazz drumming at the University of Music and Performing Arts Graz and received a master’s degree with distinction in 2017. Since then, Roland has devoted himself to a large number of bands and projects. He has played sold out tours in Austria, Germany and Switzerland with the three-time Amadeus Award nominated band GRANADA. Currently he is working on new album productions and teaching at the STUDIO PERCUSSION school in Graz.
2017 “Granada” nominated twice in the category Alternative and for the Fm4 Award at the Amadeus Austrian Music Awards
2017 Scholarship from the University of Music and Performing Arts Graz
2018 Granada “Ge bitte” number 7 on the Ö3 Austria Top 40
2019 Roland Hanslmeier 5tet “Polaroid”
2019 Granada Baff tour
2019 Drummer of the Month at Backbeat.at

Is it important to be an all-around drummer today? What are the technical, musical and above all social prerequisites for a successful band? Experience first-hand what it takes to amaze the audience on stages both large and small. Immerse yourself in a world that leaves no music genre behind and finds similarities in drumming from jazz to rock. From examples of different songs, we will learn to recognize the importance of rhythm, phrasing, timing, technique and a balanced drum sound. 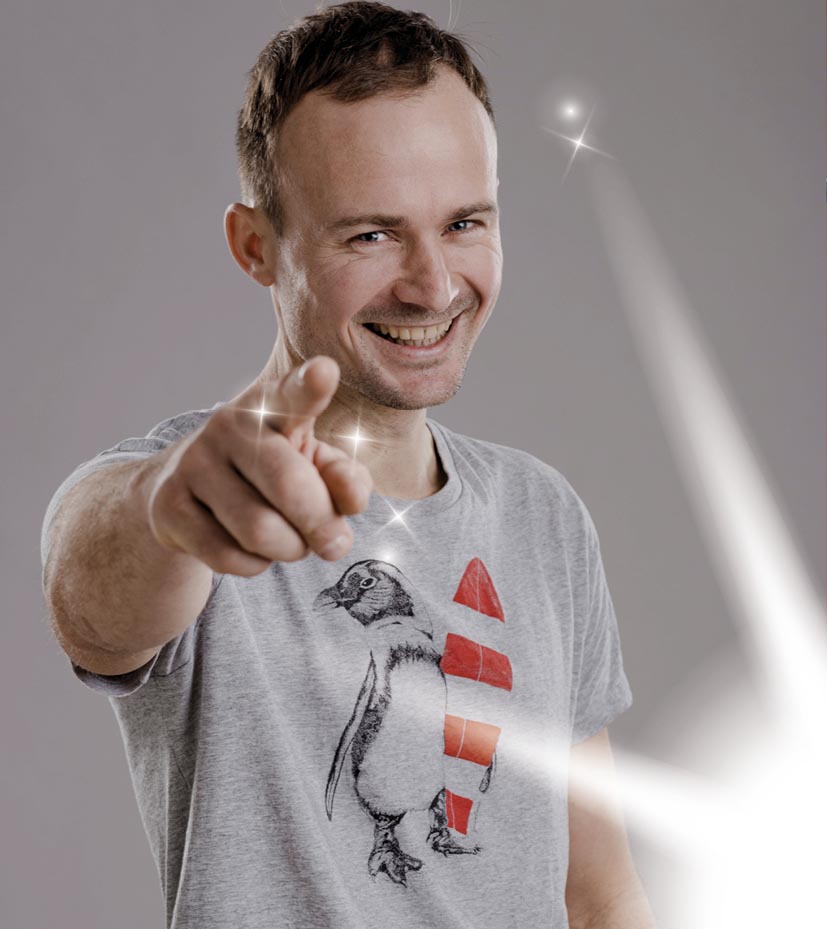 Thomas Machinger graduated with a degree in sport science in 2014 and has worked as an outdoor trainer for over 10 years. He organizes action-packed exercise weeks, summer sport camps and freerunning and parkour courses. In summer, Thomas can be found up in the air, where he pursues his passion as a skydiving instructor. The multiple-time national skydiving champion also enjoys climbing, diving and sailing.

Whether a powerful wake up or the newly introduced daily sports session in the afternoon, you can’t squeeze any more fitness into a music course. 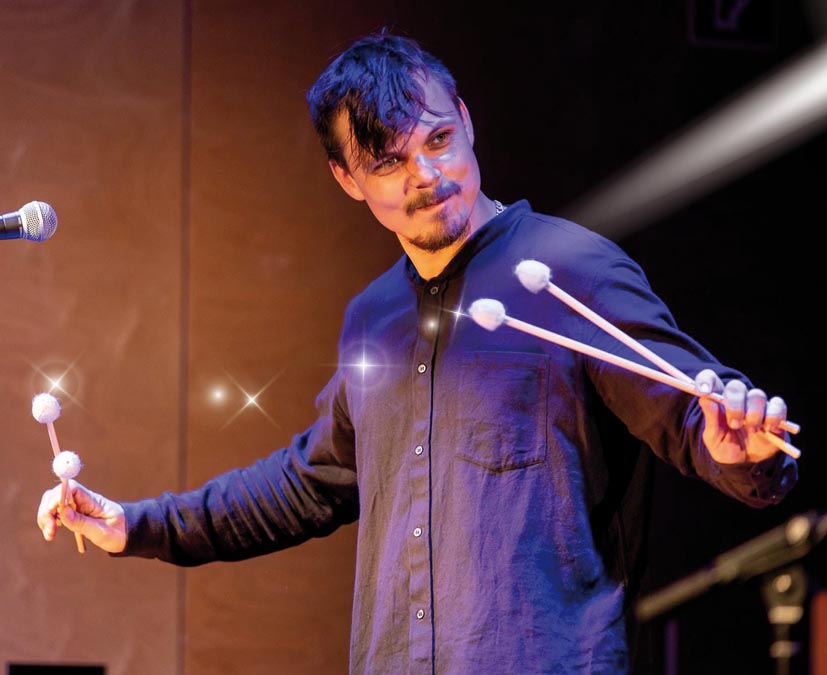 Here you will learn everything you ever wanted to know about playing melody percussion instruments: sound, tempo training, phrasing, improvisation, working out compositions, 4-mallet technique and everything else about playing mallets. From the basics to the high-end product. From classical to jazz to world music. 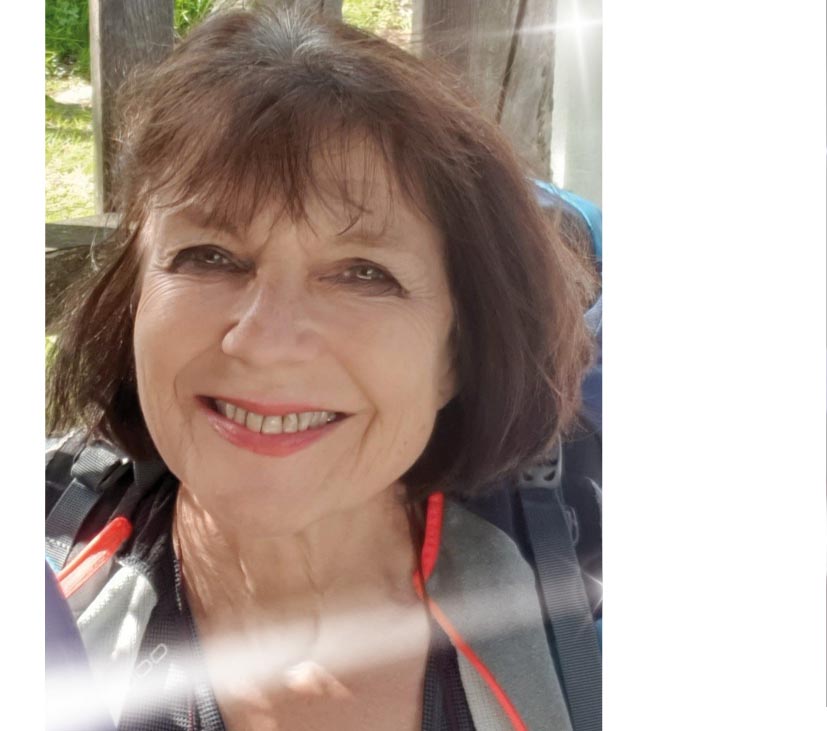 Italian and physical education teacher at HLW Schrödinger in Graz since 1987, prior to that at BG and BRG Leoben and AHS Kirchengasse in Graz.
Movement experience: various dance and yoga workshops, Vital4Brain training, participation in multisport days.
2018 – 2019 Spiritual healer training in the school of Horst Krohne
Since 2000 regular self-awareness and meditation courses with Dr. Anneliese Fuchs in Vienna
Currently in training to be a hospice companion
I am interested in nutrition, fasting, movement in general and as a preventative measure as you age.

As another member of the Meinhart family, I am able to bring my expertise in exercise and fitness to the mornings at the APC. Everything is better with exercise. Exercise gets not just the body going but also the mind.  With a mix of movement, breathing and body awareness exercises, we achieve an inner sense of comfort and physical well-being in a relatively short time. 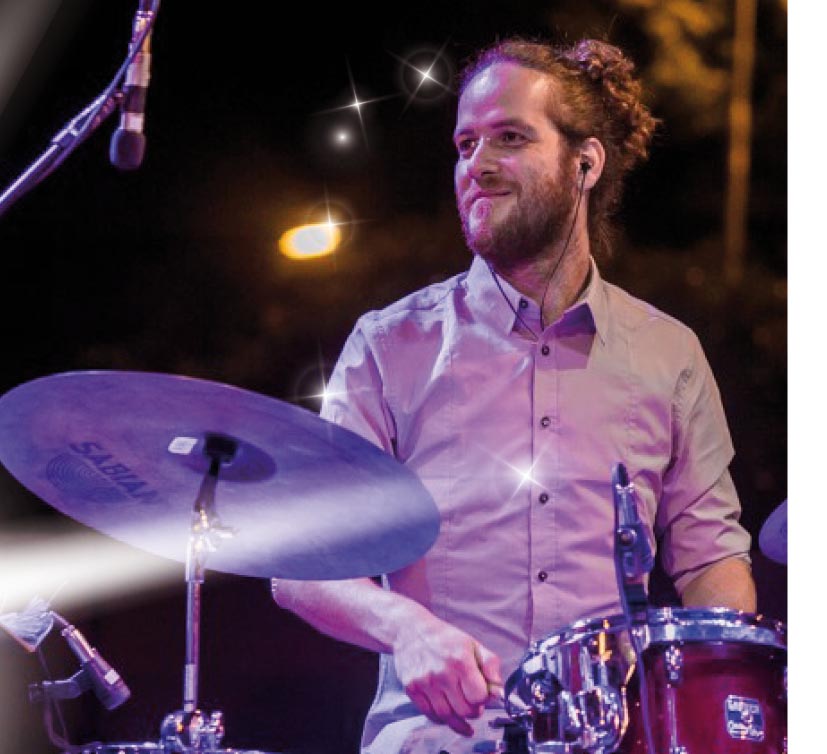 The Brazilian drummer completed his jazz studies at the University of Campinas in Brazil and afterwards his master’s studies in jazz at the University of Music and Performing Arts Graz. In his career, he has released several albums in different musical genres, from rock to jazz, from classical to contemporary.
He has lived in Graz since 2012. During this time, he has toured Europe and Australia with groups that include Meretrio, Dobrek Bistro, Ed Neumeister Quartet and many more. In 2020 Luis taught online courses and workshops for several Brazilian universities: ITA (Aviation Technological Institute), UFPB (Federal University of Paraíba) and UFRN (Federal University of Rio Grande do Norte).

Different rhythms are taught and worked out on a variety of Brazilian samba instruments.
The participants will become acquainted with traditional as well as modern Brazilian rhythms.
Learning goals: To be able to play samba instruments and samba rhythms. To listen, play and “sing” at the same time. To learn how to combine several different pieces with calls and breaks. 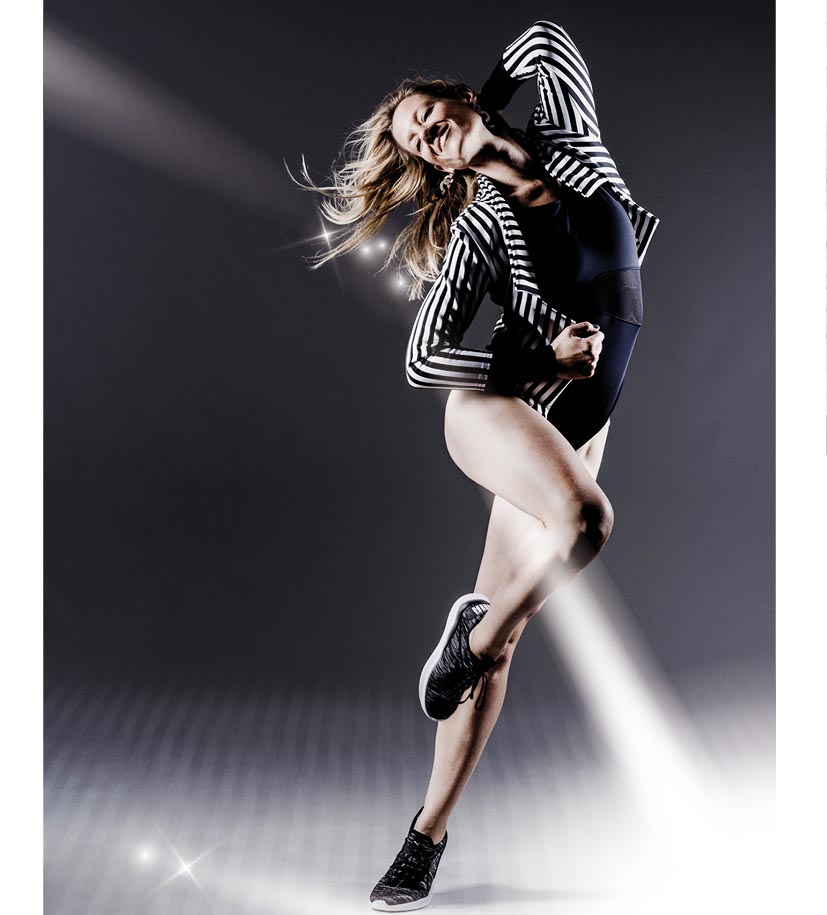 Gudrun Posedu has lead her own dance company, Dance Production Graz, since 1998. For the past 5 years, the sports scientist and media manager has developed evening-length shows with her dancers. An exciting musical cooperation developed with STUDIO PERCUSSION graz on her most recent piece, “The Greatest Show.” Gudrun was a rhythmic gymnastics trainer for 15 years and gives workshops in the instructor training program at the Federal Sports Academy.

Warm ups with dance moves, rhythmic sequences of movements, coordination training, movements from house and hip hop and short choreographies and joint sessions with Afro, Brazilian and Latin percussion are all on the program. 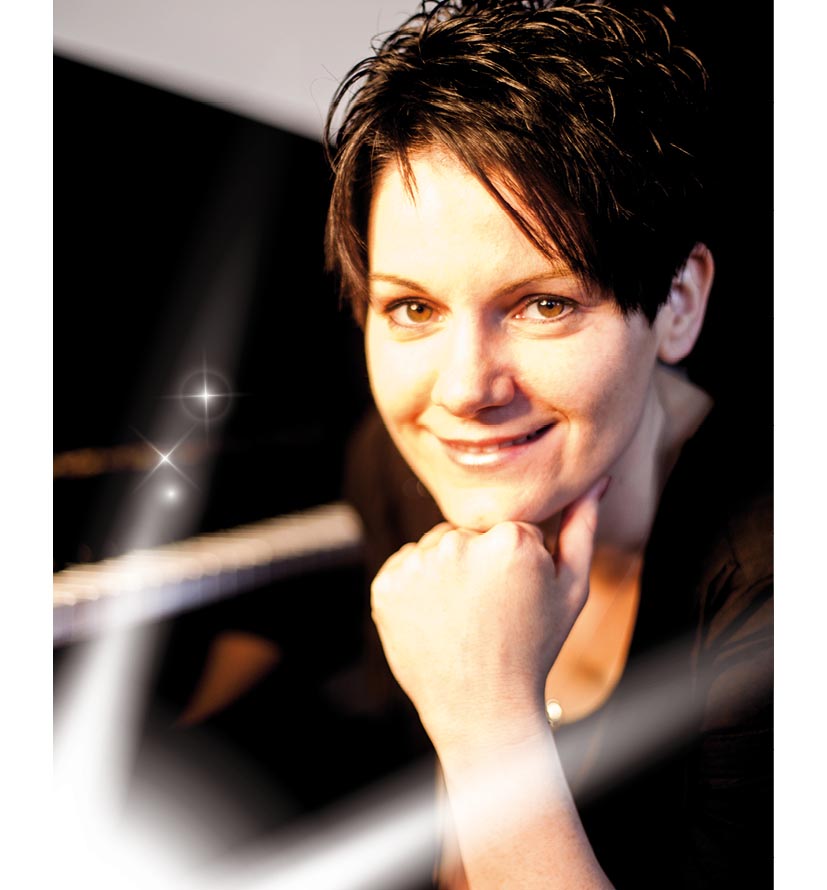 Sonja was born in Villach in 1983. 2006 Completed her music and dance education studies at the Orff Institute/Mozarteum Salzburg. Certified drummer with a final examination at the Klagenfurt Conservatory. 5-week summer performance program at Berklee College/Boston 2010. Master class in choir direction 2011 in Hamar/NOR with Thomas Caplin and André de Quadros, 2012 Choral assistant to Johann van der Sandt of the Drakensberg Boy’s Choir in South Africa, 2013 Master class in Tallin/Estonia with Eric Whitacre.
Sonja directed the Carinthian Youth Choir and founded her own project choir VocaRhythmix in 2016. She teaches in music schools in the province of Carinthia and leads professional development programs for teachers throughout Austria. 2016 Graduated with an international master’s degree in vocal leadership from the Royal Academy of Music in Aalborg/DK. 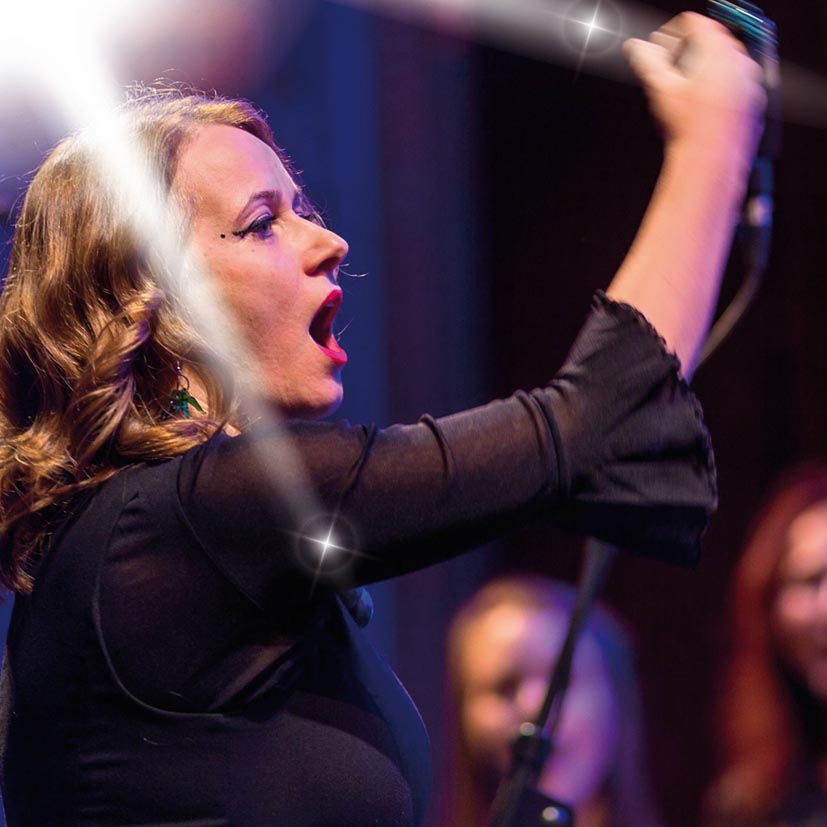 Two vocal geniuses will make us acquainted with a wide spectrum of choir music. Carinthian songs steeped in legend, groovy Balkan and African songs, works from classical literature and pop songs all peacefully coexist in the choir program. 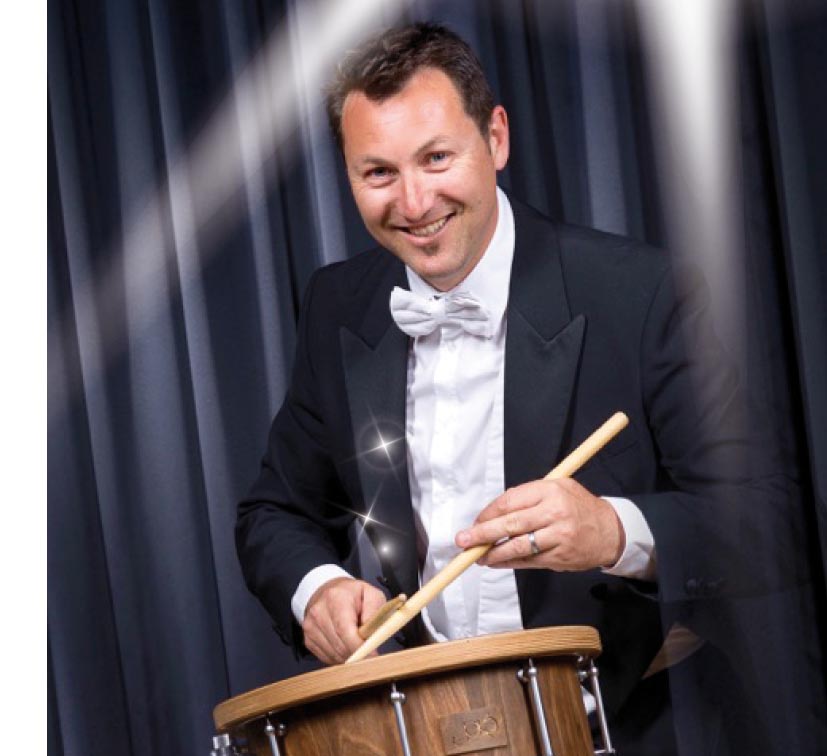 Studied at the University of Music and Performing Arts Graz. Instrumental and education degree with distinction.
Teacher at the Franz Koringer School of Music in Leibnitz.
Guest lecturer at the University of Music and Performing Arts Graz, the Conservatory of the Province of Styria, Steirische Akademie- und Landesjugendorchester.
Winner of numerous provincial and federal awards at PRIMA LA MUSICA and other competitions.
Author and editor of the ALL YOU CAN DRUM series for elementary percussion.
STUDIO PERCUSSION graz, Wiener Operetten Orchester, Blues Brothers Showband, Gustav Mahler Jugendorchester, Graz Philharmonic Orchestra, Walzerperlen, Vienna Radio Symphony Orchestra, Stefan Heckel Group. Tours in Europe, Japan, southeast Asia and the U.S.

Chamber music is regarded as the true pinnacle of classical art. Independent responsibility, transparency, creativity, emotion, skill, respect…chamber music as a reflection of society.
From beginner to virtuoso. Very exciting. 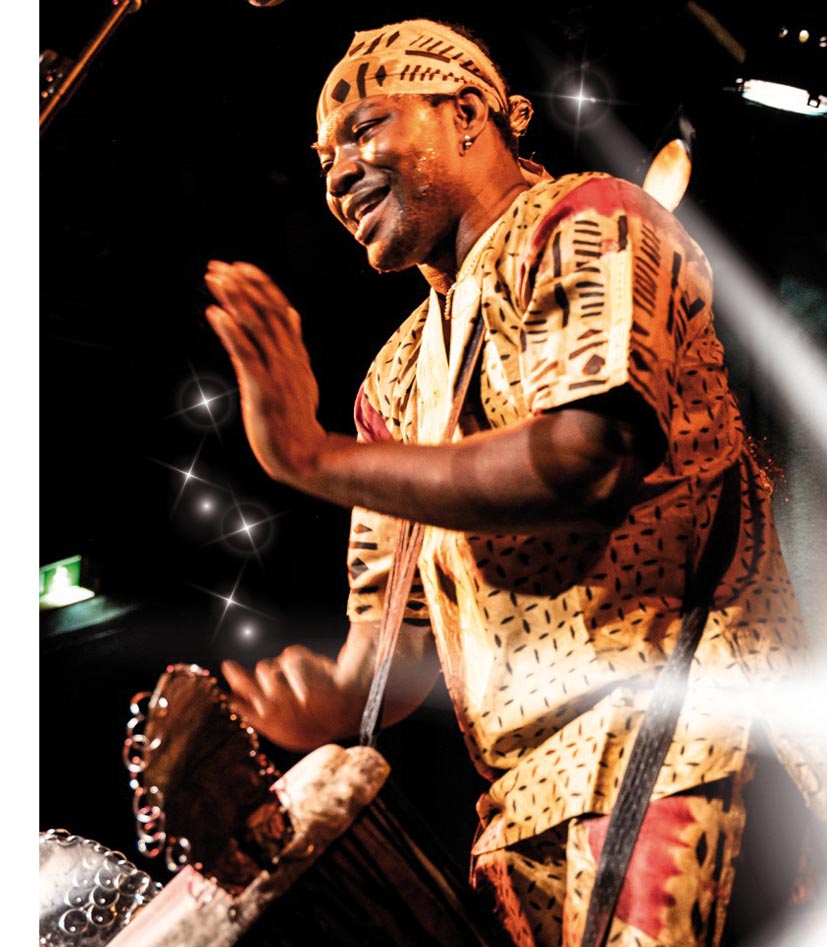 Djembe and balafon player Louis Sanou from Burkina Faso comes from a West African griot family whose family trade has always been telling stories and making music with traditional instruments.
In 2003 he came to Europe as a musician in Andre Heller’s show AFRIKA, AFRIKA. He is the leader of his own line-up LES CINQ FRERES and a guest musician with Martin Grubinger’s PERCUSSIVE PLANET as well as STUDIO PERCUSSION graz.

The traditional instruments djembe, balafon and dundun are played. Louis makes music from Burkina Faso with us and introduces Bambara, the national language, through song. 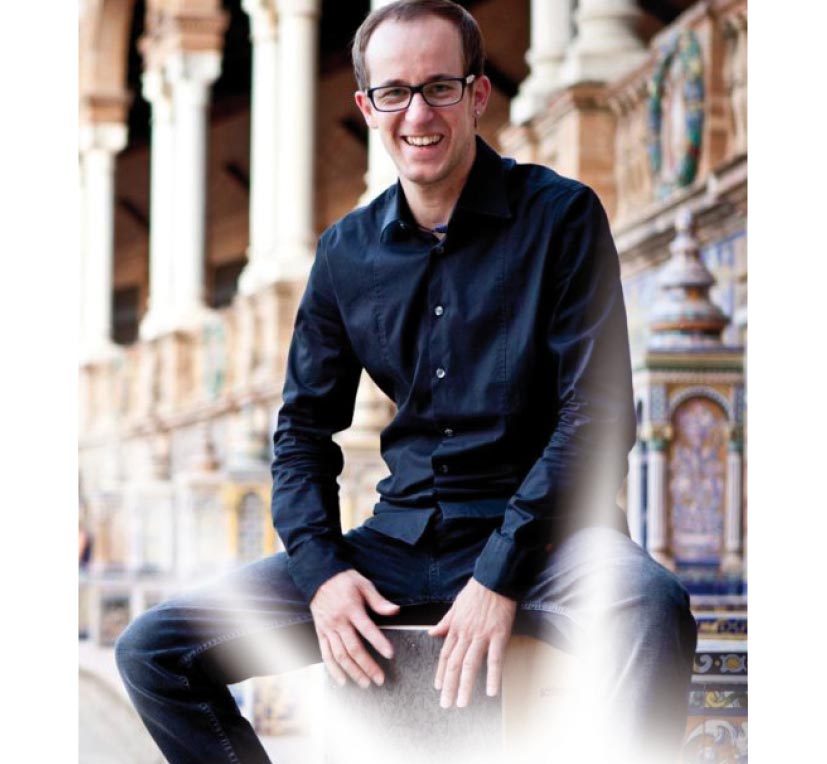 This year Claudio will not only return with his excellent Cajón lessons but also introduce us to the art of udu playing.
The udu originally comes from Nigeria, where Igbo women make it by hand out of clay. It is played in traditional rituals and ceremonies. The word udu has several meanings in the Igbo language. The most common term is “Abang mbre,” which means something like “pot for playing.” Its mystical, gentle and simultaneously dark and light sound offers our ears a stimulating and refreshing timbre. 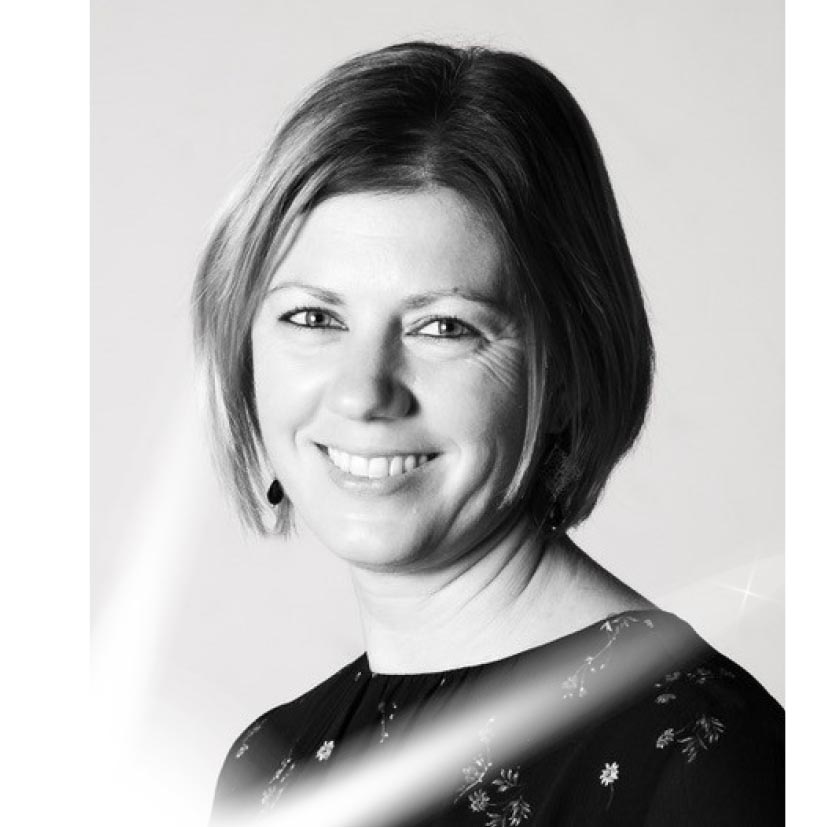 Born in Mürzzuschlag in 1981. School-leaving certificate from ORG für Leistungssport in Graz. Gained experience with children and teenagers while working at a variety of summer camps and computer camps during her schooling and studies. Child carer and ski teacher. Studied at the educational academy of the Graz-Seckau diocese. Graduated with an educator diploma in 2003.
2 daughters. Teaches at a primary school in Graz. 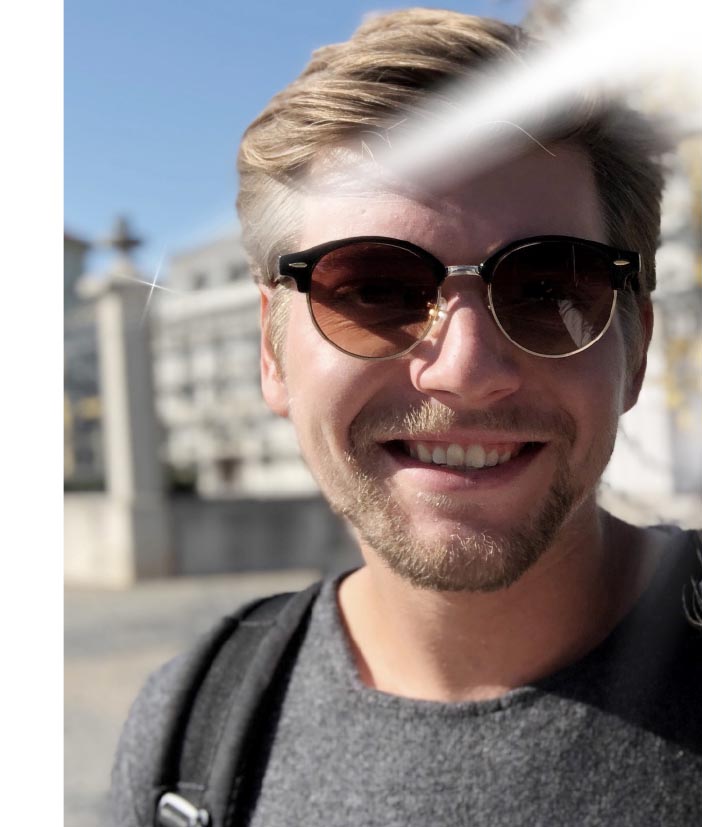 Born in Schladming in 1994. Attended the Kirchengasse gymnasium.
Attended HTBLVA Ortwein (interior design): 2010 to 2012.
Attended Modellschule Graz (art emphasis): 2012 to 2014.
University College of Teacher Education Styria/Graz: I am currently in my last semester of training to be a primary school teacher and will finish my studies in summer 2020.
Training to be a psychotherapist (ongoing).
Thanks to my work and education as a primary school teacher, I have a very good sense of responsibility and am very committed. I am also a kind-hearted, adventurous person who is always open to something new. 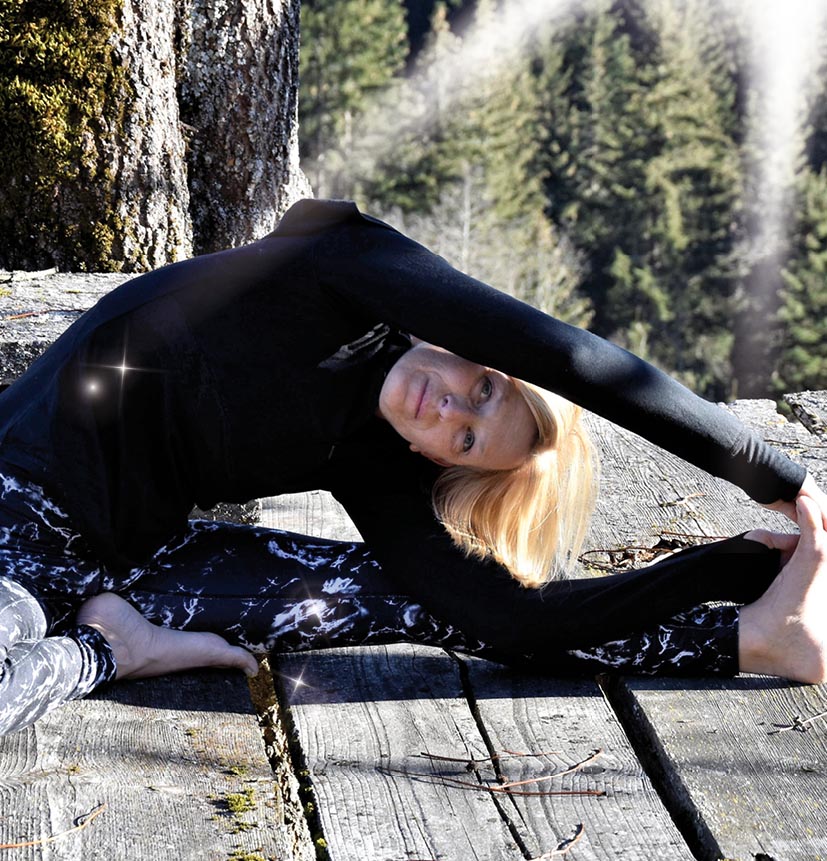 Born in 1964. General practitioner who mainly works as an occupational physician and in her psychotherapy and hypnotherapy practice.
Trained in shinson hapkido, yoga, relaxation techniques and mental training, she has directed seminars and workshops on stress management and mental health for years.

In its countless forms, yoga is the umbrella term for a variety of physical and mental exercises. Yoga is neither sport nor religion but essentially holistic training for the body and the mind.
Regular practice improves flexibility, strength, coordination, balance and body perception. This also has a positive effect on internal biological rhythms. 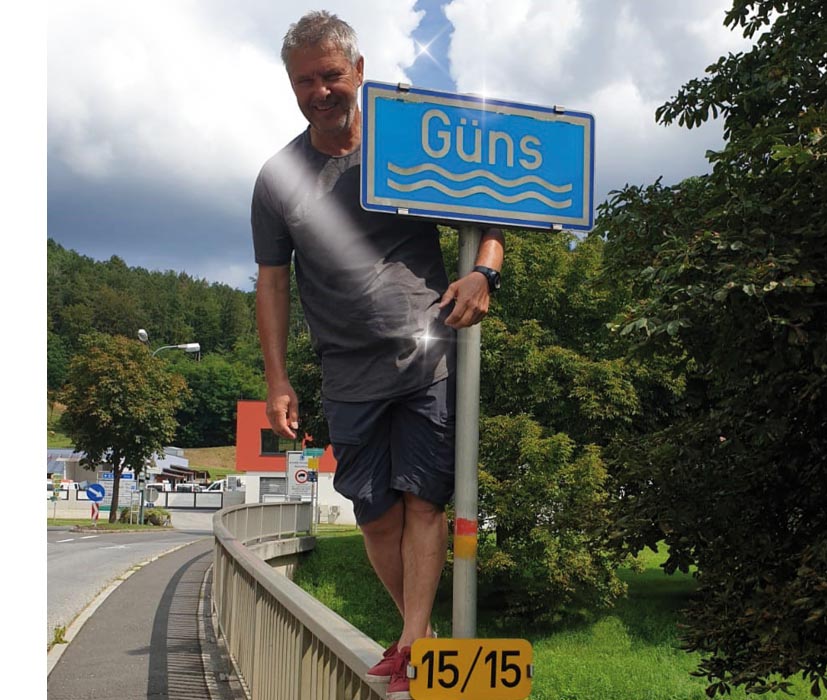 The POWER OF DRUM CIRCLE is the equal of the POWER OF LOVE in every way. Once you have experienced live how everyone in a DRUM CIRCLE swings together, you will love it and never be able to free yourself.